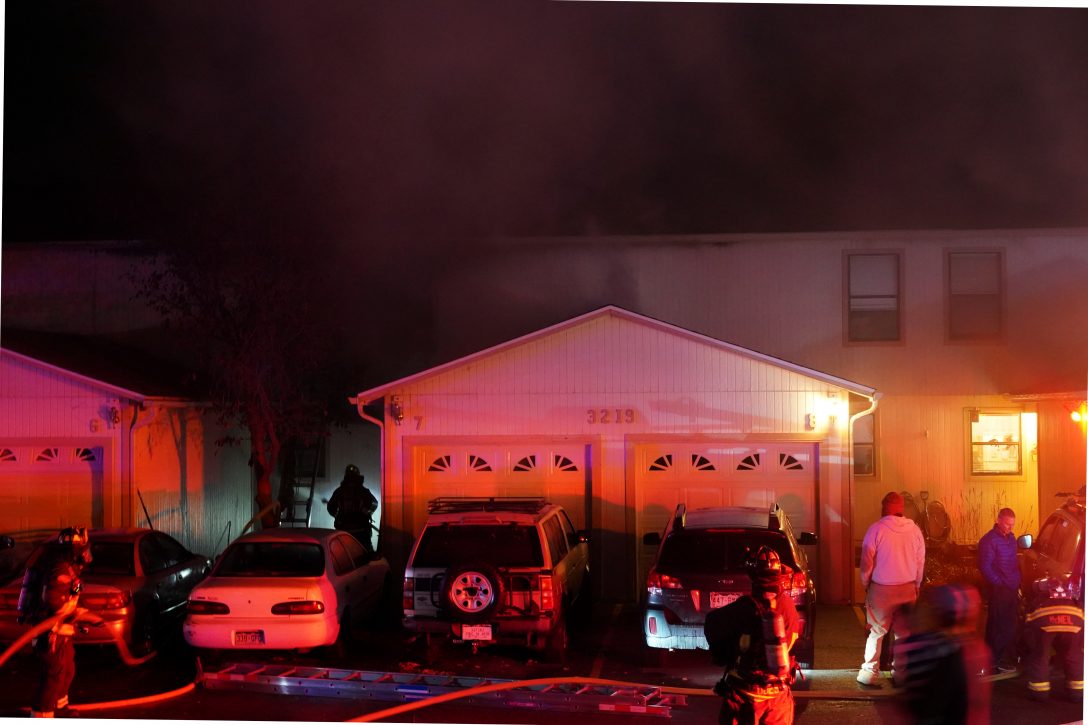 Last Wednesday just before 6am, I woke up to a strange light coming through the slit between my curtains. Later, I’d determine the light’s three sources: a firetruck, a firefighter’s high-output flashlight, and the flames shooting up from the townhouse in front of mine, 20 steps away. Heading downstairs, I smelled smoke, and, more subtly, cedar. Just seven hours ago, I’d finished building a cedar chest. The garage was still covered in cedar. Cedar shavings on the miter saw, cedar dust around the orbital sander, cedar off-cuts in a cardboard box I’d labeled “Cedar only!”. The cedar chest had been the last thing I’d worked on before going to bed, and now, even as I exited my apartment with all my valuables in a backpack, it was still on my mind. I looked back at the chest one more time and imagined the cedar lid catching sparks.

That was a week ago. To make sense of how both the cedar chest and the fire fit into the van build’s story, I’m going back even further. Weeks ago, I wrote that one of the things I planned to do next was connect the solar battery to the solar panels. That didn’t happen. It’s impractical to install a 120-pound battery and its associated wiring without first building the battery’s permanent housing. I plan to store the solar electronics in a compartment underneath the bed. So first I should build the bed. But before I build the bed, I should install the floor that goes under the bed. And before I install the floor, I should put up the walls and ceiling, so as not to scuff up the new floor while fiddling with the ceiling. Sometimes the hardest part of a build is determining the order of operations, but I think I’ve got it now: Ceiling’s next.

Even before I started looking for a van, I knew exactly what I’d use for the ceiling: cedar planks, with which I have only positive associations—saunas, rich-people closets, the Schitt’s Creek cedar chest episode. (I also strongly considered beetle kill pine but couldn’t find it in planks that were thin enough. I’ll use beetle kill wood for my furniture instead.) Various forum and blog posts recommended buying cheap cedar at Menards, a discount home improvement store that has a location in southern Wyoming, about an hour from me.

I don’t want to like Wyoming (the state voted 67% for Trump; still doesn’t have laws against hate crimes; does not accept refugees), but, the truth is, I’ll take any excuse to go there. I spent most of my childhood in a busy part of Pennsylvania where, no matter which direction you drove or for how long, you were basically always within walking distance of a Wawa. All I ever wanted was to get out of there, and now I understand why: the only time I feel 100% sane is when I’m able to make total sense of my surroundings. Ideally, my immediate environment should contain no more than one point of interest, and that point should be unmoving or (worst case scenario) moving slowly. Dullness—that’s something Wyoming delivers. Even in the capital city, Cheyenne, the only bright block of color is the red Wrangler building. Often, the only sound is the cargo train. There’s always a guy waiting to cross the train tracks, but never more than the one guy. The only coffee worth drinking is at Paramount Cafe, which used to be a theater with a sloping tiled floor. The best art I’ve seen in Cheyenne is that floor, with its decades of boot grime caught between its chipped tiles. (I’ve never been to Cheyenne’s art galleries, because every time I’ve visited, they’ve been closed.) I am not the only coffee shop patron who stares at that floor; I’ve caught others doing it too, including one greyhound who promptly fell asleep. On one of the highways leading out of Cheyenne, there’s a tree growing out of a crack in a rock. The tree is fenced off and marked “Tree Rock.” People stop there. 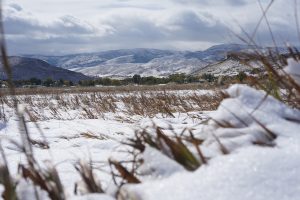 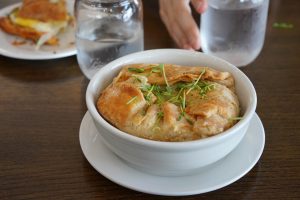 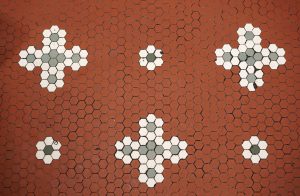 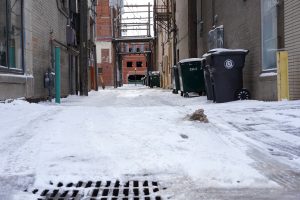 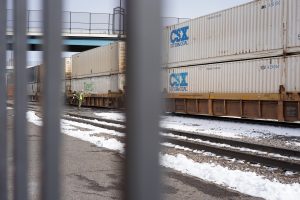 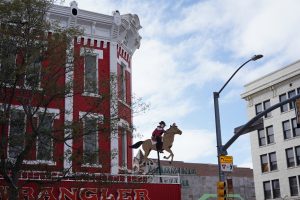 So two weekends ago, I happily visited Cheyenne and bought nine boxes of cedar planks at Menards.

Let me tell you about those planks. They are red and white. They smell as spicey as the promise of  homemade dinner. And they sparkle! The thin layer of sap coating their faces actually glitters like fresh snow. You know the calm magic that Lucy felt at the doorstep to Narnia? Before the lion, before the witch? When she walked through the wardrobe and suddenly found herself “standing in the middle of a wood at night-time with snow under her feet and snowflakes falling through the air?” That’s basically what I felt as I unboxed the planks in my garage the evening after I got back from Menards. I meant to just take a quick peek at the wood before making dinner but ended up running my hand along each of the 108 planks. Suddenly, it was midnight.

I couldn’t wait to work the wood. I decided that building a quick cedar chest never hurt anyone. To be clear, this chest wouldn’t be for the van (it would be too big; I’d have to put it in my living room), but my van could spare a few planks. Anyway, I needed the woodworking practice. When was the last time I’d used a miter saw, high school woodshop? It would be best to get all my mistakes out of the way on a project that mattered even less than the van. I can rationalize anything when I want to. 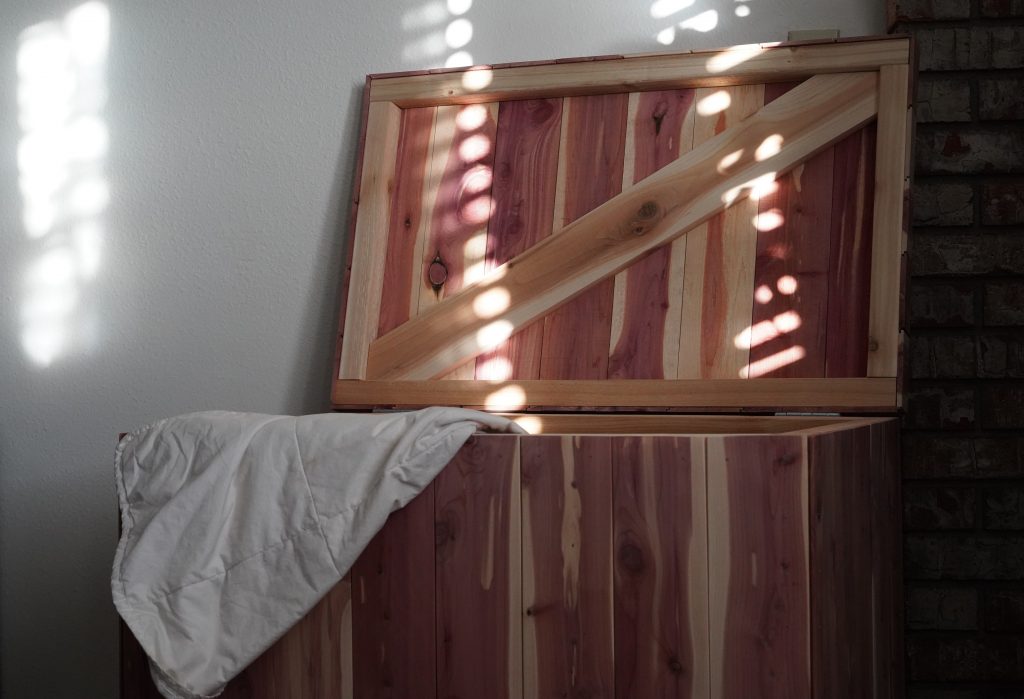 I built the cedar chest with the worst of the planks—the curvy, cracking, or brownish ones. My design was intentionally simple, because I like my furniture how I like my literature—underwrought. Add some trim and decorative handles, and the storage chest begins to look like a box for laying in and nailing shut (at least to me). I used a miter saw to cut the wood, a pocket hole jig to screw the frame together, and wire brads to nail the cedar planks to the frame. Then I sanded the whole thing. 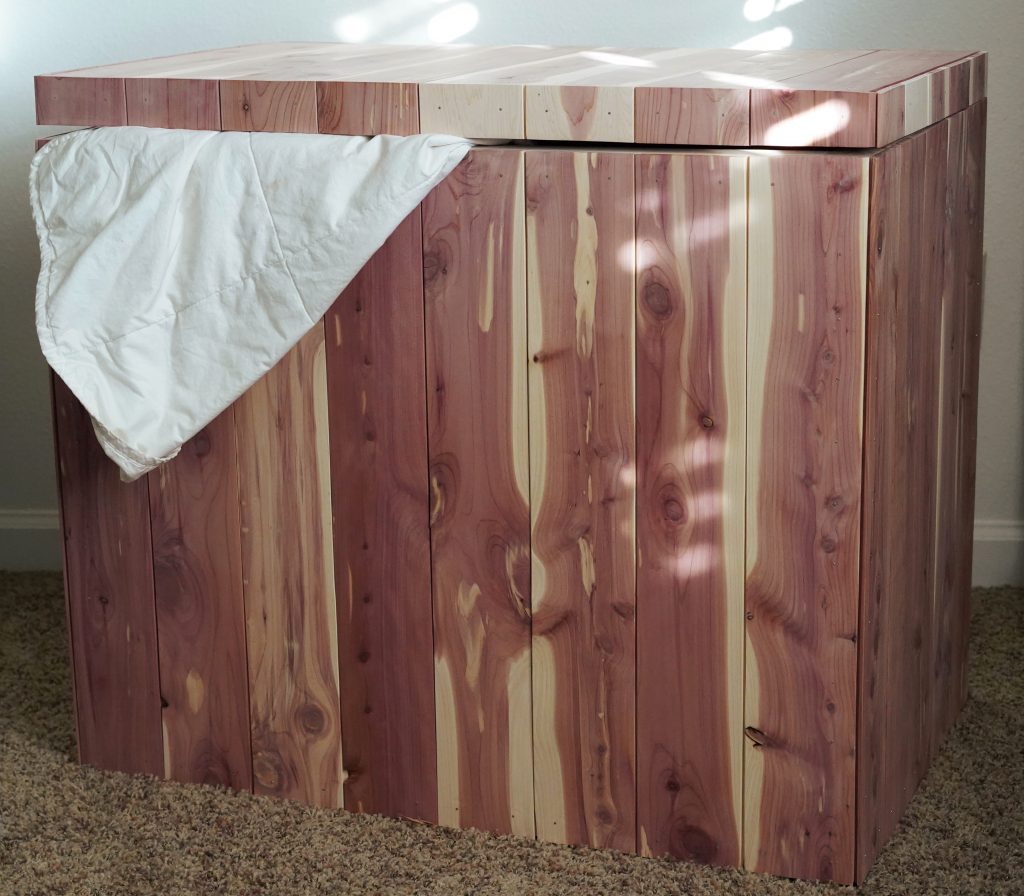 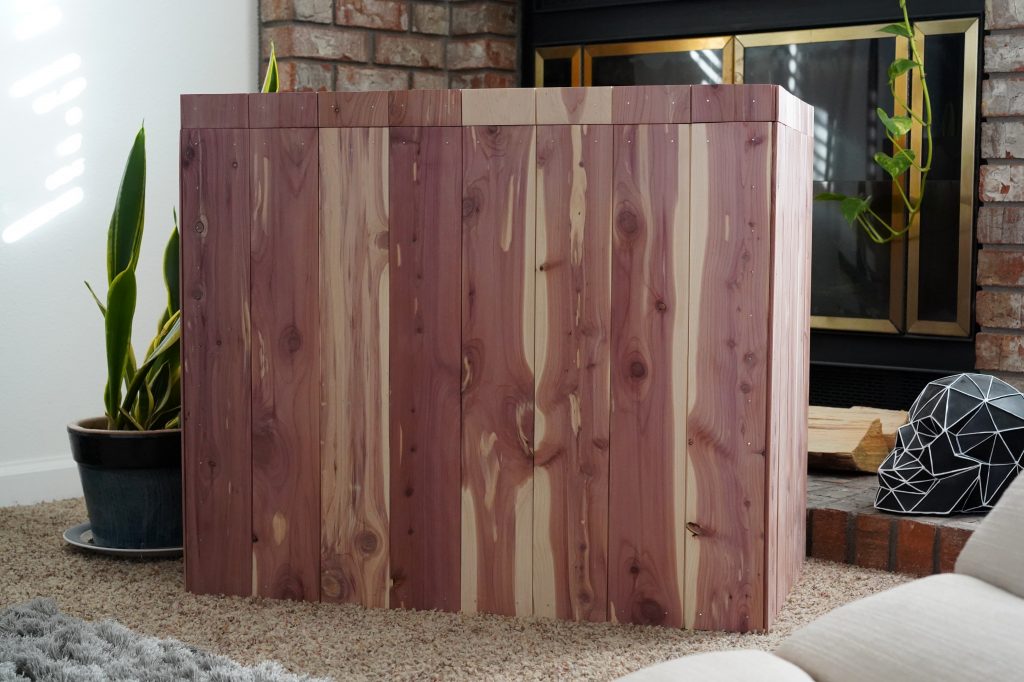 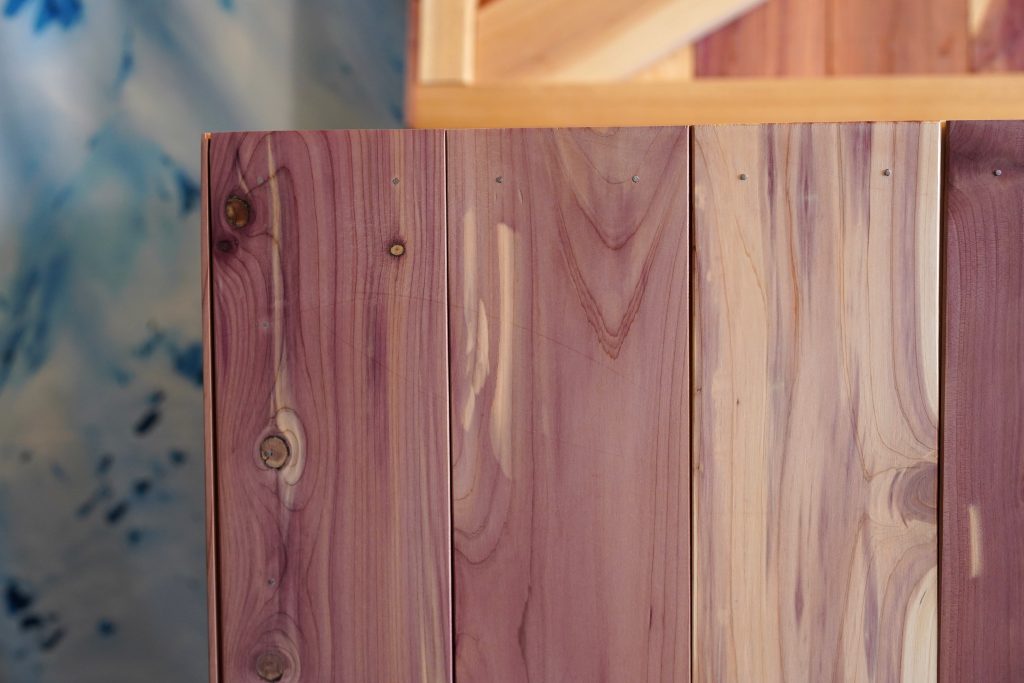 Here’s what I learned:

So last Tuesday night I finished building the chest, reflected on what I’d learned (i.e., that I wanted to learn to work wood better), and went to sleep. Seven hours later, I woke up to that fire. The fire ended tragically, though not for me. The burn was contained to the townhouse where it started and its two immediate neighbors. It took eight hours for firefighters to completely extinguish it. One person and two cats died.

This tragedy has nothing to do with me except proximity, though that seems to be enough to keep me thinking about it a week later. Strangely, the police still haven’t released the victim’s identity. For days, they cordoned off our neighborhood with police tape, though I could still wander within the tape’s boundaries, since my front door was within it. While sorting my mail and languorously tying my shoe, I eavesdropped on the police investigators who talked loudly to my neighbors and each other until they noticed me and lowered their voices.

In the absence of information, I’m spinning stories from the few things I overheard. I have no hard evidence to support the hypothesis that the victim of the fire was the man who used to work in his garage long into the night, whose project car is the only car still parked on the property (maybe it just doesn’t run). Six other people lived in that townhouse, too. When the police asked neighbors what the man was like, the neighbors said “loud” and “a piece of work.” The man and I never said anything interesting to each other, though we sometimes ran into each other at night, when we were two of the only people still up. One night not long ago, I woke up on my living floor, having accidentally fallen asleep there, and realized I’d forgotten to water the tomato plants. Stumbling out onto the porch with a watering can, I was not surprised to find the man’s silhouette against his lit garage. 2am, and there he still was, banging two hunks of metal together. He never annoyed me much, largely because his banging drowned out my power tools, making my noise more palatable to the other neighbors. Also, I felt I understood why he was out there. Most likely, he hadn’t meant to stay out so late. There are days you intend to make dinner, and instead spend the night arranging cedar planks, desperately seeking the right configuration, until you find it: two planks that, placed side by side, form a yin-yang. Momentarily, everything feels alright, as perfectly settled as a Wyoming Sunday afternoon. Finally, you can go back upstairs and eat a banana. 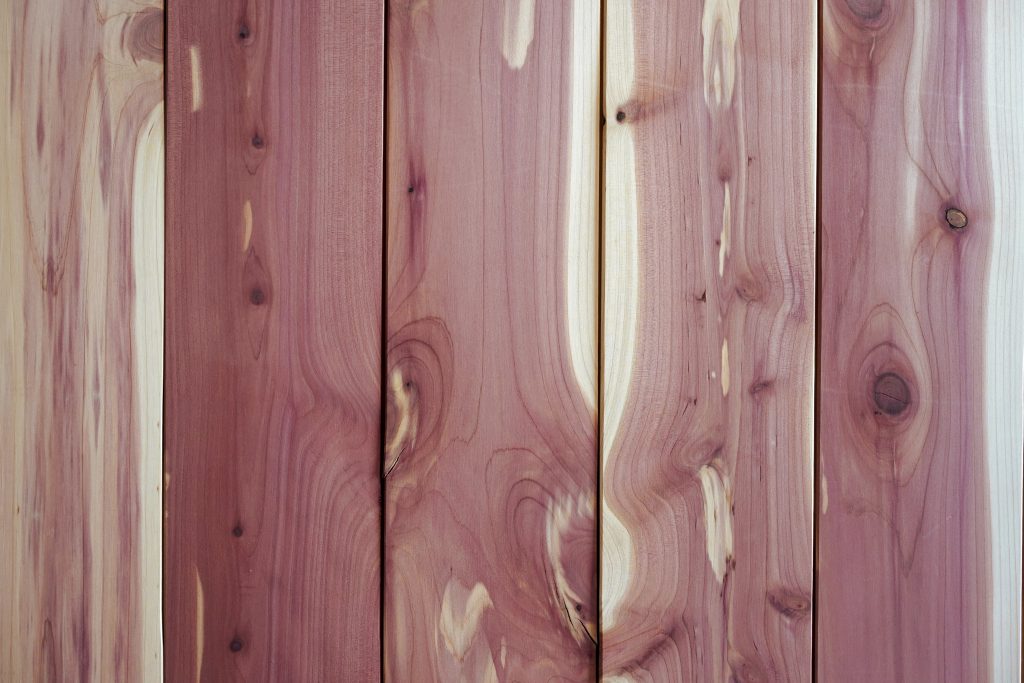 I don’t know what you do after witnessing a tragedy that’s not yours. I guess one thing people do is acknowledge their random good luck, and the victim’s shit hand. When I looked back at the chest as I exited the apartment last Wednesday morning, I tried to feel devastated about the thought of losing something I’d put so much effort into; it seemed to be what the moment required. Really, I felt okay—I already knew I’d build a better chest one day, had already placed “The Art of Japanese Joinery” on hold at the library, was already positioned a safe distance from the fire, already looked forward to the nights I’d spend alone in the garage.