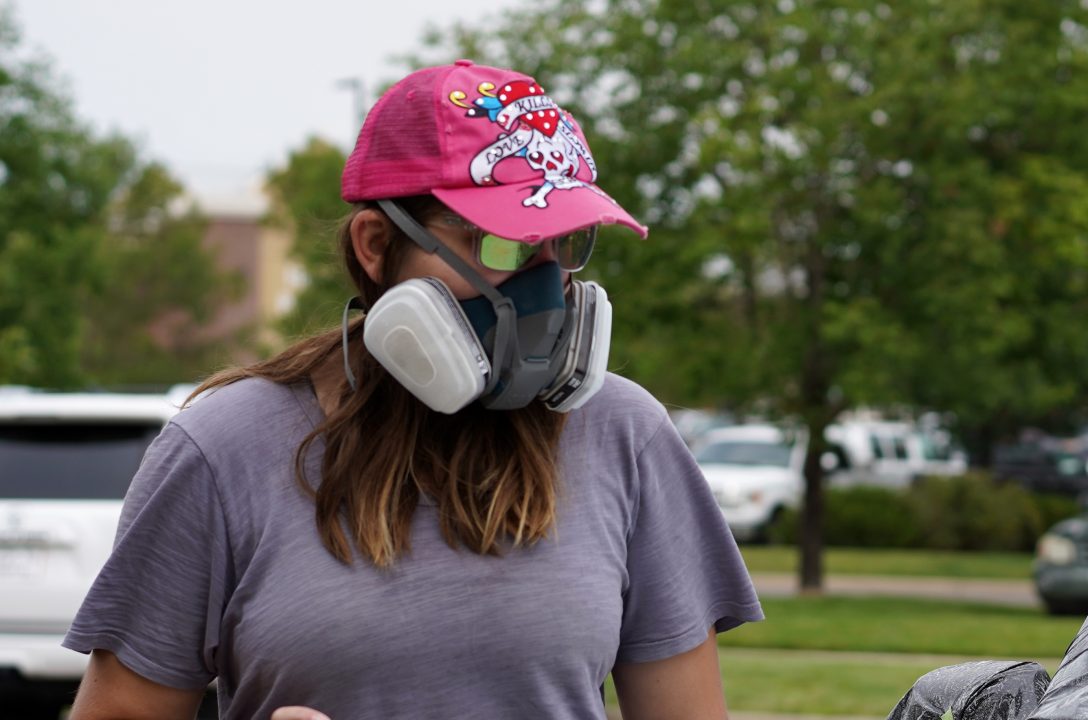 The other day I began my van conversion in earnest by making a 14” square hole in the roof. But before I condense eight hours of work into five captioned images in my next post, I’d like to issue a disclaimer: The process of building this van feels nothing like looking at my before and after pictures. So far, not one part of this project has been quick or straightforward, and I don’t expect that to change going forward. Reading blogs and Instagram posts about #vanlife is like watching Rachel Ray make a 30-minute meal at a kitchen island conveniently stocked with clean pots, washed greens, and pre-cut pats of butter. Actually converting a van is like spending 30 minutes mincing onions while wearing swim goggles to prevent tearing up, then crying anyway as you write a note to your roommates to please wash your fucking dishes within 12 hours of use xoxoxoxo

Let’s return to these two before-and-after photos (and two more later on) to get a sense of what really happened. 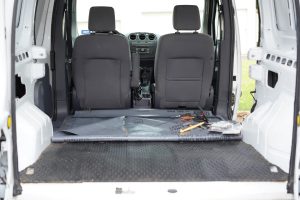 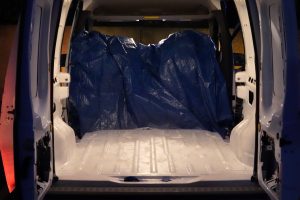 The first thing I did to the van was remove the aftermarket flooring. Under the floor, I found condensation and surface rust on the van’s steel base. I also found one sugar packet, one long red plastic straw, two razor blades, a ripped DVD of the 2002 anime series Gundam SEED, a business card for an elementary school principal, and a printout entitled “5 things in my job that cause negative emotions” that actually listed seven things, including “strong lack of planning” and “our office floods with every hard storm.” On the back of the printout, I found what looked like a grocery list. Three of the six items were Dr. Pepper. Here’s a fiction writing prompt for my fellow writers: Buy a used car and write a character inspired by the things the car’s previous owner left behind.

The aftermarket flooring was made up of two steel frames, six very big bolts, and two layers of waterproof liners. It was heavy. As I dragged the flooring into the garage, I began to feel a pricking pain in the arch of my left foot. (A month later, the pain persists.)

Though Mike did not participate in this part of the van build, he also hurt his left foot that day. On the Fourth of July, he sat down in the corner of a dark patio, to better pet the three dogs in attendance. A nearby spider sensed a disturbance in his microenvironment. The little hairs covering his body moved to the vibrations of the fireworks two miles away, and to the whoosh of Mike’s fast-approaching left leg. The spider readied his fangs. “The mosquitoes are really biting,” Mike said, swatting at his left foot.

The next day, as Mike’s foot and ankle began to swell, I scrubbed the van’s rusty base with steel wool and white vinegar. I worked out of a parking spot in my apartment complex’s front lot, where many of my neighbors hang out, too. That day, a girl in a pink bathing suit visited me, dragging her polka-dotted beach towel through the grass. Our apartment complex does not have a pool. The girl observed me with her shoulders back and big stomach fully out. Her swimsuit was so taut, it was practically see-through around her bellybutton. Inspired, I filled my stomach with air. I wished that this girl would never grow into a woman who’ll be informed, over and over, that she’d be better smaller. At one point the girl said to me, “Look, a grasshopper,” but other than that we kept to ourselves.

As I finished painting the van’s cargo floor with Rustoleum to prevent future rusting, Mike’s foot turned redder. Every time he stepped outside to visit me, his limp worsened, until he stopped visiting me because he could no longer walk. When I later cleaned his foot, I noticed a fang mark on his ankle that seemed to be turning black. “Is that bad?” Mike asked. Being sensible, Mike chose not to exacerbate his worries by scouring WebMD. I chose the opposite. After half an hour of research, I’d learned so many terrible things, I had to lie to Mike about my findings. I said his bite definitely did not look at all like the work of a brown recluse spider. Even if it was a brown recluse bite, these things healed very quickly. No way he’d lose part of his leg to flesh rot. Meanwhile, Mike consulted with a Kaiser Permanente online chat doctor who recommended elevating, icing, and cleaning the affected area every two hours.

Between spider bite cleanings, I returned to the van, where I began dismantling the cabin area. After finding rust under the cargo area floor, I wondered if the cabin floor held any similar surprises. I removed the seats, took apart the console, rolled back the carpet, and screamed, “Oh shit!”

Under the carpet, there was a hole the size of my fist in the van’s undercarriage. It wasn’t a rust-out; the hole appeared to have been cut for a pipe that had since been removed. I could see right through the hole to the asphalt below, where an ant was presently marching, without a single companion or possession to her name, bravely venturing forth into parts unknown. The girl in the swimsuit watched me watch the ant.

I decided to head back to my apartment, where I could google how to deal with a 3-inch steel hole while re-bandaging Mike’s foot. As I locked the van, I heard the little girl scream, “Grandma’s home!” Then she deepened her voice and added, “Oh shit, oh shit, OH SHIT! Guess what I saw today!” Just as I shut my apartment door, I saw the girl turn towards me.

It was in my best interest to avoid going back outside for a couple hours. I wiped Mike’s pus, then called seven welders for price quotes. Apparently welding an undercarriage hole is particularly tricky. Only two of the welders agreed to the job. One of them said, “I’ll do it, but I’m not going to enjoy it.” I scheduled an appointment with the other guy.

In the evening, I sprayed the van’s floor with another layer of paint. As a little girl, I used to have a reoccurring dream set inside a bowl of whipped cream, where everything was shades of white—daisy, cotton, snow, egg shell. When I’d wake up from this dream, I’d always feel supernaturally calm. That was exactly how my van’s freshly painted white floor made me feel. 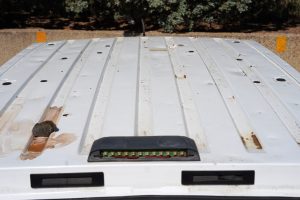 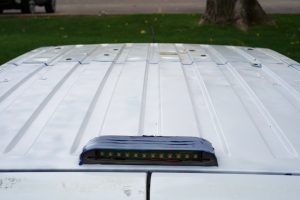 After a couple days, Mike’s foot started to heal, just like the online chat doctor had predicted. I turned my full attention to the van’s roof. I couldn’t work on the front part of the roof because I had to wait for the welder to fix a hole there (this hole looked just like the hole in the floor). Until then, I’d work on cleaning and painting the back part of the roof.

Just like I’d done with the floor, I scrubbed the roof’s rust off with vinegar and steel wool. When it came time to spray paint, I decided to do it in a Walmart parking lot. I didn’t want to paint in my apartment’s tight lot, because what if I accidentally sprayed a neighbor’s car?

I arrived at the Walmart at 7:30pm on a Tuesday. By the time I’d masked off my paint area with tape and draped the van’s sides with tarps to contain splatter, it was getting dark. I imagined I looked insane, out there in the far reaches of the parking lot, wearing a “Love Kills Slowly” hat and a respirator, shaking a primer bottle in the long shadows of the setting sun. Passers-by disagreed. They apparently found me very approachable. One guy came up to me with a petition and said, “You look like a villain on the run. Are you a Colorado voter?”

As I began spraying, a store worker appeared, making his way to a nearby shopping cart. I assumed I was violating some store policy but trusted this guy wouldn’t tattle. I’d worked his job before and knew he didn’t get paid enough to confront me. Shortly after that, an RV pulled in close to me. Then a Promaster van, then a truck with a tent, then a rusty old van. I realized I was parked in the middle of my town’s biggest unofficial campground. I tried to spray faster. Another coat of primer left, then three thin coats of paint.

A vehicle unlike the others—a sporty, shiny car—pulled in two spots away from me. The driver had mad hiccups that I could hear even through his closed windows. As I finished with the primer, the man’s hiccups subsided and he rolled down his window.

“What are you doing with the vinegar?” he asked. He pointed to the bottle I’d left beside the van. I told him, and he said, “I used to work in an auto body shop. Never used vinegar for rust like that.” I braced for what I estimated would be five to ten minutes of mansplaining, during which I’d be taught the benefits of Evapo-Rust or other such nonsense that supposedly did the job better, but instead the guy surprised me by saying, “Sorry, am I annoying you?”

That’s how it was one summer evening in one Walmart parking lot in the Rocky Mountain West halfway through 2018: It was permissible to unload four cans of asthma-inducing volatile organic compounds in a public space. It was possible to listen to an NPR economist list the benefits of a growing economy while observing an old woman with an oxygen tank emerge from a camper van that contained little more than an air mattress. It was considered socially acceptable to approach a young woman wearing a respirator mask at night. But it was not okay to assume she wanted to keep talking to you—was this an inkling of cultural change? I kept expecting the hiccup guy to either go into the store or drive away. Instead, he changed his button-up shirt for a T-shirt and fell asleep in his sedan’s driver’s seat.

As I waited for the last coat of paint to dry, I picked at the bugs that kept flying into the wet roof and getting stuck. Every time I tried to save a bug, all I ended up doing was ripping its wings, leaving the rest of its body to writhe to death within the paint. I am a brooder. I could have easily slipped into any number of thought-spirals right then, alone in the dark. For instance, I could have considered the meaningless of building out this steel box on wheels, whilst my peers are running for office, starting nonprofits, publishing books, and whatnot. But I did not brood, because just then the sprinklers along the perimeter of the parking lot turned on and began methodically rotating towards me in tall, sweeping arcs. Suddenly, my life had a singular purpose. I had to protect my paint.

I didn’t know what would happen if the water hit. Would the water mix with the paint and make the roof feel forever sticky, like a kid’s hand after lunch? Or would the water cause the paint to form cracks, trapping water and breeding rust? Maybe the water would sit nicely on the surface of the semi-dry paint, like a grasshopper on a calm lake. I started the van. Everything in the cabin that I’d recently dissembled rattled—loose chair screws, disconnected airbag cables, various screwdrivers, picks, and pry bars that hopped dangerously close to the hole in my floor as I accelerated.